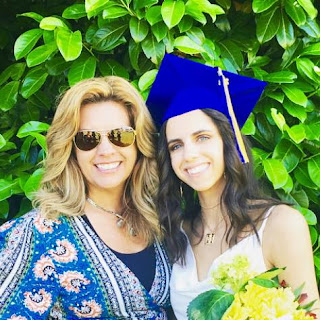 It's about to happen.

My baby, my last child, is going away to college on August 18. I am already sensing a need to go to Costco and stock up on Kleenex and possibly Rocky Road ice cream. It was so hard letting go of my first child, back in 2008. Now...I'm letting go of my last.

This hurts in an even deeper way, I suppose you could say.

When my oldest daughter went to college, I wrote this poem. I can't even read it without crying right now because I know I have to live this out all over again - and for the last time. But in life, we moms know that we are constantly letting go. Letting go of expectations. Letting go of control. Letting go of making decisions for them. Letting go of all the noise that we used to complain about, but now all of a sudden we kind of miss... The list goes on.

My girl leaves in just sixteen days. So, I have time to pull myself together. But for now, I will leave you with this. And I hope you will share it with any mom you know who is in the middle of her own "Letting Go Test", and please let her know she is not alone. I get you, girl....

Nine months of growth inside of my womb

And in what seemed like an instant, she was there in the room

I barely had time with her when they took her away
To bathe her, to weigh her and make sure she was okay.

I handed her to them, but inside I was torn
My first "letting go test" was just after she was born

The pain in my heart, I could not ignore
As I realized this test was the first of many more

I nursed her eight months, and then it was time to move on
So I gave her some cereal – yet another era gone

When she was five, it was time to let go again
As I walked her to the school bus, she wore a huge grin

"Oh, God! Please protect her! I cannot be there.
But I trust you are with her and you'll keep her in your care!"

And I was grinning, also, though my heart broke in two
As I watched my little girl learn to tie her own shoe


A few months later, she lost her first tooth
(I cried like a baby, if you want to know the truth!)

This "letting go test" was a challenge indeed:
When she took the story book from me and started to read

I blinked and in an instant I realized much time had passed
As she went off to middle school – she was growing so fast!


The "letting go test" intensified, I remember with dread
When I drove her to the DMV, and she drove me home instead!

"Oh, God! Please protect her! I cannot be there.
But I trust you are with her and you'll keep her in your care!"

My prayers were more frequent, I really must confess
As she was gone more often now, and I saw her much less

And just a few months later, my girl turned eighteen
A young woman she was becoming now – what a sight to be seen!

"God, where did the time go?" I began to pray
As our family dressed up for Graduation Day.

She walked across the stage with her head held high
And as she took her diploma, I began to cry

But these tears were so different, more like tears of delight
My girl was a woman now and she was going to be alright

All the "letting go tests" that I'd had over the years
Helped me let go, trust God and release all my fears

We unloaded her things and we hugged her goodbye
And I tried not to do it, but I couldn't help but cry

But the sadness I feel is not the same as before
I feel such joy for her – there's so much in store!

We taught her to love, to respect and to learn
And to always put God first - there's no need for concern!


"Oh, God! Please protect her! I cannot be there.
But I trust you are with her and you'll keep her in your care!"

Posted by Leslie Nease at 2:04 PM No comments: Links to this post

Leslie Nease
Wife, Mom, Speaker & Writer for Women's ministry, Voice for Abide Prayer & Meditation App, Freelance Voice Over Artist. I love Jesus, love my family and love to encourage people to be their personal best and develop a deeper relationship with Jesus. Welcome to my blog!

The Cast of Survivor China