Fall is here!  Oh, how I love this time of year. Driving down the road the other day, I noticed the colorful leaves "dancing" on the ground all around us.  My first thought was "What on earth would they have to dance about?  Don't they know they are dead?"  The poor little leaves.  It looks like their "hayday" is over.  They are withered up and they've fallen to the ground only to be raked away and toted off as trash.  It's a shame, because they look so beautiful on the outside with all the reds, oranges, yellows, purples and browns scattered across the walking trail.  But just because they were beautiful, that didn't change the fact that they were not alive anymore. 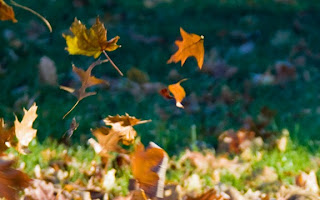 But they were dancing...

I wonder... if the leaves could think, what would they think?  Maybe they would recall the days when they were just a tiny bud, bursting into the warm sunshine with excitement and a zest for life.  Each precious day, they would soak in the rain, the sun and enjoy the warm breezes that blew through, prompting them to sing in unison with the other leaves holding tightly to the tree branches as they all rustled with the wind in harmony.

I wonder... if the leaves could think, would they think back to the day that they realized things were beginning to change? Life was beginning to get more difficult and the sun wasn't shining down on them as much.  Their colors became more beautiful and vibrant on the outside, but inside they were not feeling beautiful or vibrant at all.  I wonder if they knew something was wrong.  Instead of a welcoming breeze, the winds were chilly and uninviting.  I wonder if they recall the moment they realized they were hanging on by a thread to the tree...ready to fall to the ground, to give up and just let go at the first sign of the next breeze.

I wonder... if the leaves could talk, would they tell us how it felt to float gently to the ground the day they finally let go?  The force of the wind was more than they could bear.  They had to surrender.  Would they tell us tales of how they would lay there, among other beautifully colored leaves, wondering what was going to happen next as they huddled together, terrified and vulnerable.  Would they admit that they pondered if this was the end of the road for them - that there was nothing left?

Then I wonder...if leaves could talk, would they tell us about the day the wind gust began to blow through their huddle with a powerful blast and instead of singing with the other leaves up in the tree as they did in their youth when those gusts would go through, they found themselves dancing with those very same leaves, all dressed up in their autumn colors, as if they were celebrating their new life!  A chance to dance freely - given only by the strength of the powerful and mighty wind.
Yes, the leaves may have been dead...but the wind brings life to them.  So they celebrate!  They are filled with hope again.

Life is different now, and their path is determined by the wind these days, not by the security of the tree branch they so tightly held onto before the change.  They must trust not in their own strength to hold on now, but in the wind's strength to carry them through to where it would have them go.  Their mourning has turned to joyful dancing and they are clothed with joy!

What a beautiful picture this has given to me of the life God gives to us through His Spirit.

You have turned my mourning into joyful dancing.
You have taken away my clothes of mourning and clothed me with joy,
that I might sing praises to you and not be silent.
O Lord my God, I will give you thanks forever!

John 3:8
The wind blows wherever it pleases. You hear its sound, but you cannot tell where it comes from or where it is going. So it is with everyone born of the Spirit.
Posted by Leslie Nease at 5:26 AM

Leslie Nease
I like to talk about real life issues, Jesus, midlife stuff, adult kids, marketing and fitness. I am a Marketing & Community Relations Consultant for The Studio (www.thestudioheber.com) and I co-host a podcast with my sister! www.midlifemadnesspodcast.com. Oh, and I was on Survivor in 2007. I have 4 kids and a fabulous husband who I adore.