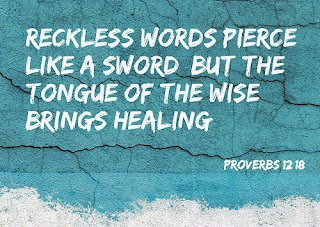 Years ago, a close relative said something to me that "stuck". You know what I mean? Sticky statements - either good or bad - that never go away and seem to replay themselves in our heads.
I was going to go visit where a lot of my family and friends lived. I told my relative that I was coming and I'd like to organize a get-together because I knew I wouldn't have time to see everyone individually. My relative said, "You know the world doesn't just stop spinning because Leslie comes to town." That stuck.
That was what was said. Here is what I heard, "You're annoying and not worth our time. Just stay home. You're bothering us." No, that was not the intention. No, that did not reflect the heart of the individual. But it stuck.
Recently, I went back to SC to visit, even though I had been there just a month and a half prior. I didn't tell many friends. I didn't want to make a fuss and honestly, my "sticky statement" was playing over and over in my head and heart. I figured they would be annoyed with me. I mean, the world doesn't just stop spinning when Leslie comes to town, right?
I thought I was doing my friends a favor. Keeping them from having to rearrange their schedules. Keeping them from having to drop everything to come see me again. I imagined the eye rolls as they had to try to "fit me into their busy lives".
But I was wrong. So wrong.
My friends were so surprised I didn't let them know I was coming. They were disappointed, but not enough to let it stick with them. Instead, we planned a last minute get-together and those who could come, came. Those who couldn't, didn't. And the world kept spinning. And my heart began to heal a bit. How? Well, at our gathering, I told them the reason I didn't tell them I was coming was because I was afraid it would be an imposition. As we talked, I realized why. I shared my "sticky statement story" with them and as light was shed on it, it lost it's grip on my heart. As it turns out, the darkness it was hiding in was the super-glue holding it to my heart.
Words matter, friends.
What we say has a lasting impact on the minds and hearts of those to whom we speak. Make those words count. Let the people you love know that you love them. Be careful with quick, hurtful statements. People can be very tenderhearted, even if they seem strong. And if someone ever said something negative to you that stuck, share it with someone you trust. Let it lose it's grip on you. And be free!
Posted by Leslie Nease at 7:53 AM No comments: Links to this post

Leslie Nease
Welcome! I'm Leslie Nease. If you are a mid-lifer with empty nest syndrome, a desire to reinvent yourself, you have a zest for adventure and a passion for life, you've come to the right place! ;)